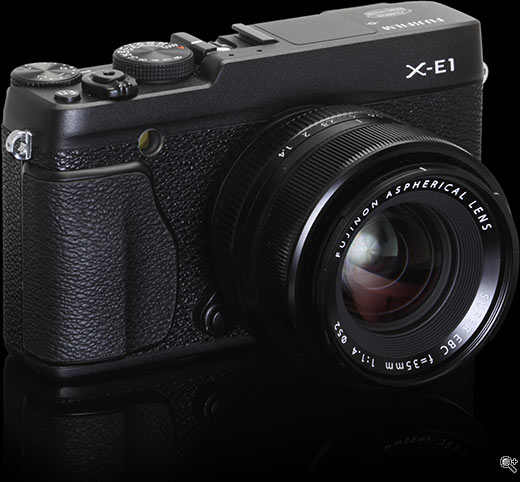 Preview based on a pre-production Fujifilm X-E1

When Fujifilm launched the X system in January 2012, it did so with an unusually high-end body – the X-Pro1. With its unique hybrid optical/electronic viewfinder, solid metal body and analogue dial-led control philosophy, it was clearly targeted towards professionals and keen enthusiasts looking for an updated take on the classic rangefinder concept. The X-Pro1 was generally well-received, but its price was always likely to limit its appeal. Fujifilm’s new baby, the X-E1, aims to broaden the line’s appeal to wider range of enthusiasts, and will compete directly with the likes of the Sony Alpha NEX-7 and Olympus OM-D E-M5.

The X-E1 is in essence a slimmed-down X-Pro1, with the large, complex and expensive hybrid finder replaced by a purely-electronic viewfinder. Not any old EVF though – it uses a 2.36M dot OLED unit, out-speccing the X-Pro1’s 1.44M dot LCD finder. In return its rear screen is slightly downgraded in terms of both size and resolution, to a still-respectable 2.8″ 460k dot LCD – according to Fujifilm this is necessary to keep the camera’s size down. The result is a compact body that’s broadly similar in size to both the much-loved FinePix X100, and its most obvious competitors like the E-M5 and NEX-7.

The X-E1 gets a few new features relative to the X-Pro1, commensurate with its class. There’s a little built-in pop-up flash, a 2.5mm stereo microphone socket for movie recording, and the ability to use an electronic shutter release cable via the USB port (in addition to the signature threaded shutter release button). But otherwise it’s near-identical to the X-Pro1, using the same 16MP X-Trans CMOS sensor and EXR Pro image processor, and almost exactly the same control layout and interface.