May 2013 | By Amadou Diallo and Andy Westlake

Review based on a production Nikon D5200 with firmware 1.00

As Nikon’s ‘advanced beginner’ DSLR, the D5200 sits between the entry-level D3200 and the enthusiast-targeted D7100 in the company’s most recent APS-C lineup. The D5200 offers 24MP resolution (like its APS-C stablemates), an articulated rear LCD and more physical controls than the D3200, but without the twin-dial interface and professional grade AF system of the decidedly higher market (and much more customizeable) D7100. 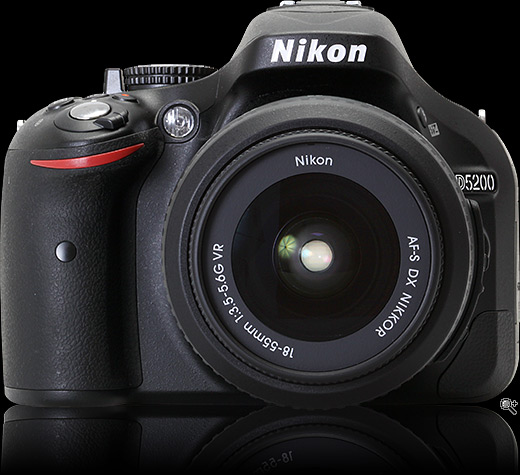 On the outside, the D5200 is virtually identical to its predecessor, the D5100, with external changes limited to a dedicated drive mode button on the D5200’s top plate, stereo microphone grills atop the pentamirror – like on the Canon EOS 650D – and a slightly redesigned rear multi selector. The D5200’s more significant upgrades lie ‘under the hood’. Impressively, many of these are inherited from higher-end Nikon DSLRs, including a 39-point AF system with 9 cross-type sensors and ample frame coverage, and a 2016 pixel RGB color-sensitive metering sensor, both taken from the D7000. The D5200 borrows from the D7100 a well-implemented Auto ISO feature that is tied to the lens’ current focal length.

For video shooters, the D5200 can record Full HD 1920 x 1080 movies at up to 60i or 50i (when set to NTSC and PAL respectively), although this uses a central crop of the sensor area. More conventional 30p, 25p and 24p modes use the full width of the sensor. In manual mode you have the option to take limited control of both shutter speed and ISO, but not aperture. And a stereo sound meter lets you adjust the level of either the built-in or or external mic, such as the optional ME-1 stereo mics.